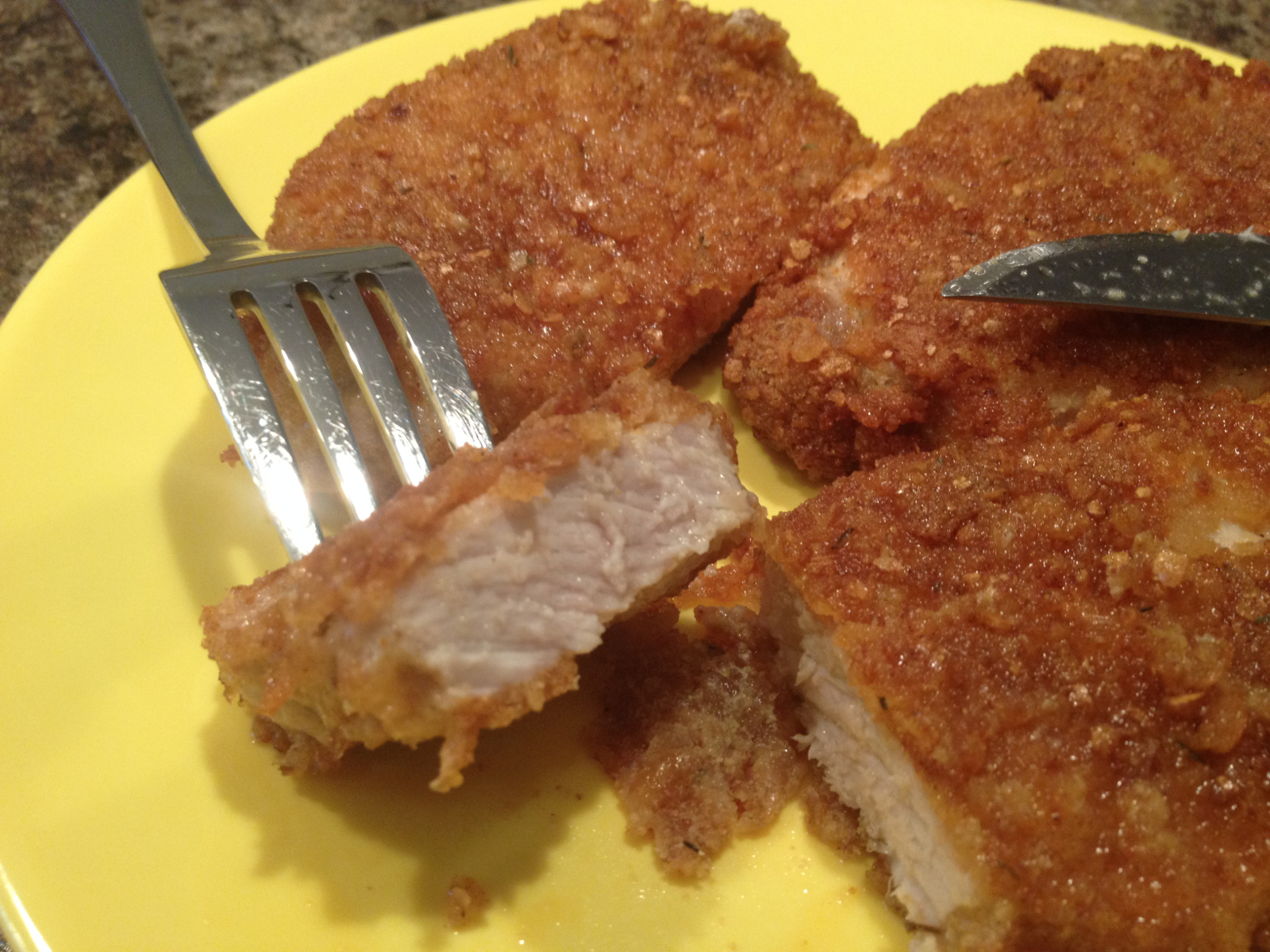 Pork, Pork, Pork. There we go! That’s much better. I’ve proclaimed my love for the other white meat many times on this site. And I’m about to do it again!

With my wife and children not doing GF as a standard, I have been given free reign to come up with my own dinners for the most part. I usually cook sides or the main dish that we can all eat and then I deviate from there. So this recipe came from one of those evenings of my deviating from their planned meal. 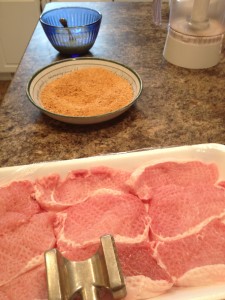 I’ve always loved what has been lovingly termed country-fried or chicken-fried pork chops. It seems a little odd to me to call something chicken-fried, especially chicken-fried chicken, when it’s just breaded and fried. But I digress …

Since normal flour is verboten with Celiac Disease, one is left to use either GF flour or come up with alternatives. I’ve always been intrigued by different breadings as well, hence the pretzel crust!

With the added seasonings, the pretzels form a nice crunchy crust that proves without a doubt that GF is Not Taste Free! 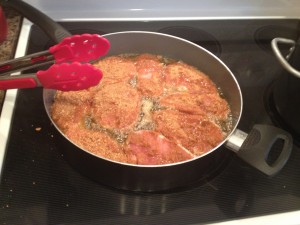 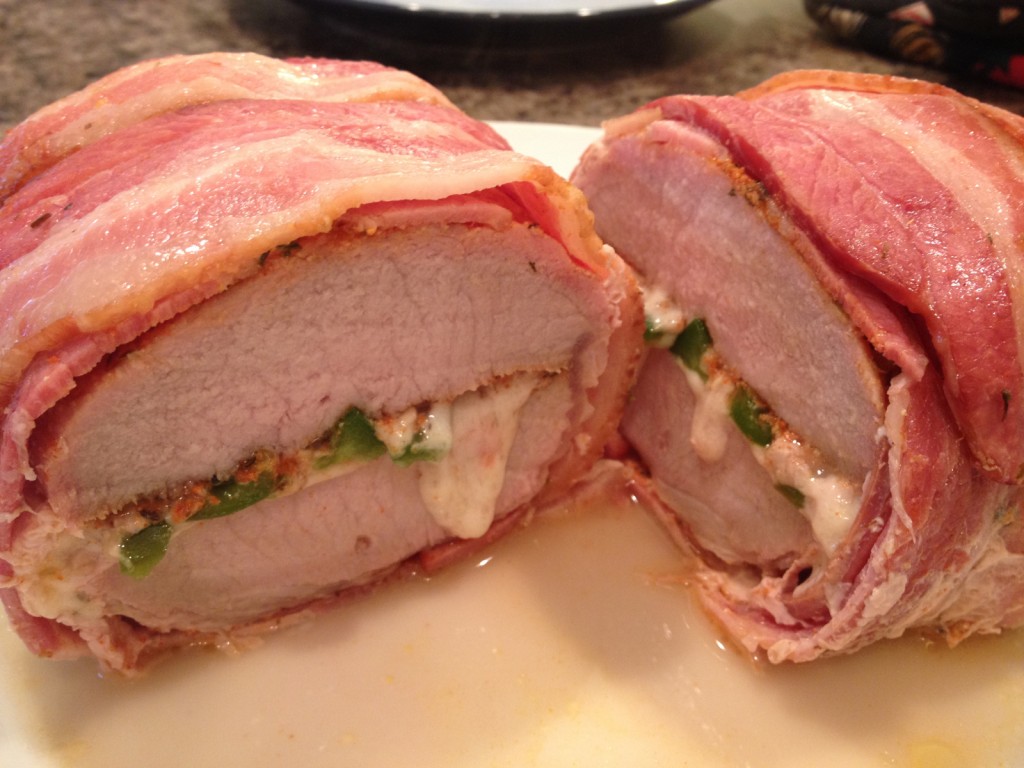 While the bacon may not look cooked, that’s not the case since it was wrapped in parchment paper to keep the loaf together. This also helped keep the juices from just evaporating.

I’m not exactly sure why I need to keep wrapping stuff in bacon. Whether it’s a meatloaf or a jalapeno, everything really is better with bacon. Ok in my case, bacon and cheese! 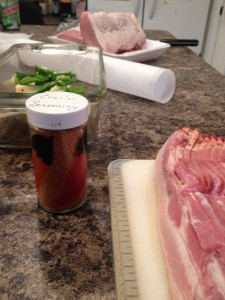 Pork roasts were never really served in my house when I was younger. Sure we did pork chops – battered and fried, maybe some milk gravy. But pork roasts were just not done. Then I got diagnosed and started looking at other types of foods to fill me up, because we all know GF is Not Taste Free. And doing a pork roast fit the bill.

My first variation of a simple pork roast was my Caribbean Jerk Roast. But recently I saw another Celiac blogger talking about bacon-wrapped loaf and I had to experiment. And boy was this experiment tasty!

I made a sandwich with Pepper Jack cheese and fresh jalapenos between pork “buns” wrapped in bacon … it was awesome! 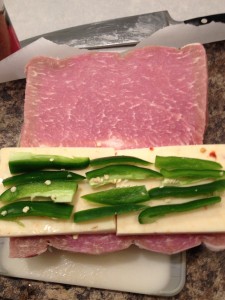 There are times that I question the methods by which we cook. For instance, in the height of the heat, we stand outside and grill steaks over hot coals. And I understand that ice cream is a year round treat, but really in the middle of winter, you’re gonna eat some food that makes you just as cold inside as it is outside?

So it is with great trepidation that I offer up this recipe in the middle of the summer using a slow cooker. That said, I believe this sauce could easily be used on the stove-top to make it a much quicker meal. Or if you like the idea of the slow cooker, this would likely work fantastic with a nice pork roast and shredding the meat over rice. The proof is in the the pork that Gluten Free is Not Taste Free!

Note: I will be trying this again with a roast and we’ll see how that turns out! I’ll let you know! 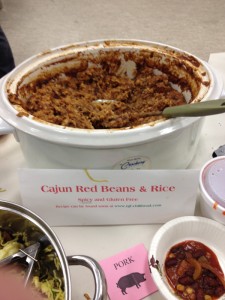 I made this for a Cultural Potluck; had to rep for the States and be GF! I have to say it was a hit!

My wife teases me that I’m from the South (of the United States). I have a ton of relatives in the Georgia, Florida and Alabama area as well as a bunch of friends scattered throughout. I was born in Florida and lived in the Atlanta area and throughout the South for about 15 years, However, I don’t hunt, fish or eat collard greens. The last time I drank Sweet Tea on an irregular basis was more than 16 years ago.

Despite all that, there is one dialect (if you will) of Southern cuisine that I love – Cajun/Creole food. If you want to know the difference between Cajun and Creole check out this link. For the purpose of my site, I guess I like Cajun food more. And a lot of that love of the food was the short time I lived close to New Orleans and Emeril Lagasse (more the latter than the former).

Now Cajun food was not a staple in my house as I was growing up. My folks liked “beans” as they called it. Think a big pot of kidney beans cooked all day with onions and then finished with corn bread – I hated it. Might be part of the reason to this day why I will avoid beans on a normal basis; the same can be said about ham. Sorry Mom! But when I was old enough and we were close enough to someplace that had a Popeye’s Chicken, I learned of the joys of almost-Cajun. Then I had actual Cajun food in New Orleans and I was hooked.

Enter one of the OG Food Network shows featuring Emeril. Bam! and I was intrigued enough to try to figure out how to make this Cajun staple! I still have a number of cookbooks from him and thanks to him, I learned the basis for what grew into my version. And finding regular ingredients for this recipe were much easier SOB (South of the Border). But here it goes …