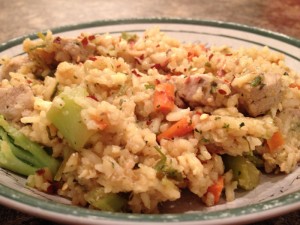 A long time ago, in a galaxy (or in this case) a country not too far away, I worked in a supermarket deli. That job helped me learn a lot about a number of different foods and the preparation of said foods. At the same time, it helped me flesh out what I liked and what I despise. To this day, I try not to eat ham unless there is no choice.

Bacon, on the other hand, can be eaten for breakfast, lunch, dinner and dessert. But I’m getting sidetracked.

I worked through most of the sections of that deli including the wok station where I first learned how to do fried rice. Obviously this will not be the recipe they used for a few reasons such as it’s GF, it’s spicy and it’s a non-traditional fried rice. And speaking of the other white meat, it has pork as its meat and like my quesadillas, it’s a full meal deal!

For an alternative, replace the pork and apple sauce with chicken and orange juice.