Bread, bagels, tortillas, cake, cookies, pizza … the list goes on and on of items that you supposedly cannot have as soon as you’re diagnosed with Celiac’s Disease. BCD, I didn’t worry about where I was getting bread or what kind. Of course that changed immediately ACD.

Fortunately we now live in an age where Gluten Free or Paleo has become a fad diet for most. Unfortunately, there are a lot of us out from whom it is a necessary evil that we have to live with every Girl Guide or pizza filled day. Alternatives are a priority and I searched for quite a while among different brands before I found some non-local bakery options that were cost effective and good! The best among those (and the reason I haven’t searched for different options) is the fantastic GF brand –

Ratings: 4.5 out of 5 Peppers – the only reason they didn’t rate a perfect score is a few personal preferences.

Taste: For this, I will divide it up as I did for the selections above. So to begin with, let’s talk about Breads. 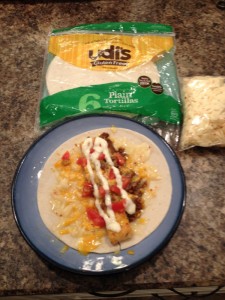 I have not tried everything in their bread options simply because my local grocers have not had all the options. That said what I have tried is the Plain and Whole Grain Bagels and the Large Tortillas. And everything that I’ve tried has been outstanding. I will use both of these primarily for breakfasts such as the tortillas in a breakfast burrito. The taste and texture are superb, not waxy like certain other brands (lookin at you Good for Life). While GF tortillas and bread in general lack the pliability that Gluten provides wheat filled products, Udi’s tortillas come the closest to folding like a regular tortilla. And the trick with the bagels, microwave them for about 30 seconds and they are perfect – soft and not too dense.

As far as breads go, I found Glutino breads (a sister company of Udi’s with Boulder Brands). I got hooked by Glutino’s Cheese Bread and haven’t needed to look for anything else. The only complaint I have with most GF options is portion sizes – they are usually about half as big as their Glutenized counterparts.

I have tried a few of the no name grocery bread products – don’t do it! Go for Udi’s or Glutino – they might be a bit more expensive, but they are worth it.

I haven’t tried a lot of Udi’s Dinner options outside of their Pizza Crust. Unfortunately the only pizza crust option that I’ve found that I would 100 percent choose over any others is my Brazilian Pizza Crust recipe. Every other crust is thin and smaller than necessary. That said, Udi’s crust is still good in a pinch and better than most pizza joints simply because you can actually top your pizza rather than the sprinkling that those places do.

What comes after dinner? Dessert! I recently found Udi’s Salted Caramel Cashew soft-baked cookies – OMG! The only problem I had with them is that I ate them too quickly and there weren’t enough in the package for me to have more! If you weren’t told they were GF, you wouldn’t have a clue. So GOOD! The only other item I have tried so far in the dessert category has been the Cinnamon Rolls. As far as cinnamon rolls go, they would be better with cream cheese frosting rather than the sugary glaze included. And they can be a bit tough or dense if you over or under cook them.

All told, Udi’s Gluten Free is a brand I will recommend to any one who asks.