Shortly BC, I didn’t know anything about Gluten Free food. I was pretty sure that gluten helped with elasticity in pizza and other types of dough. Other than that, I was clueless. Like most people

I likely assumed that Gluten Free was taste free.

Well, since then I have discovered and proven to many family and friends that Gluten Free is Not Taste Free. And the Griffin Takeaway is one of those places that also proves that! People should try the Takeaway’s food whether they are on a GF diet or not. These guys are legit and Mom and Pop, and are worth the money. Let me tell you why …

Rating: 4.5 out of 5 Peppers – While this bakery/restaurant has loads of options, many of those options border on the culinary side of cooking rather than the Mom & Pop side that their facade suggests. There is nothing wrong with their food, it’s mostly delicious! There are just times when it might be cool to have something a little less French Bakery inspired and more Grandma inspired!

Restaurant type: Gluten Free with Vegan and Dairy and Nut Free options – While the Takeaway is primarily a GF bakery, they also do lunches for takeout.

Food: When I was diagnosed with Celiac, it was about a week before my 40th birthday. What a great shock that was! On the other hand, I found Griffin Takeaway with a week and my wife surprised me with a birthday cake from them. It was decadent, moist and definitely made me realize that Gluten Free does not mean taste free. The cake was a chocolate cake with an apple filling topped with a peanut butter frosting. Right up my alley, not too dense and just awesome.

Recently I went back in for lunch because I had time and I was close by, I was feeling adventurous so I went for the Flax Vegan bread Cheese-A-Tarian paired with a Fully Loaded baker and finished with a granola bar. The flax bread was light and moist, perfectly complementing the mixture of cheddars, cream cheese and feta along with tomatoes. The baked potato could have been a bit better – the chickpea chili needed more spice but was good overall and it needed to be warmed a bit more. And I’m sure people like the granola bars; it was uber-moist and chewy but seemed more like fruit cake than an actual granola bar to me. 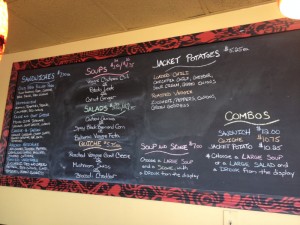 Selection: For their lunch menu, there are surprisingly few options That said they do those options very well. On the flip side, they have a ton of different options for their bakery – they feature a ton of different cookies, breads, and other bakery options. In some ways, the simplicity of their store does little justice to the complexity of their food and the time and effort they lovingly put into it. That said, you can tell that they focus more on being a bakery and less on the variety of lunch menu since I don’t think it’s changed in a couple years. Eh, if it’s not broke, right?

Price: Most GF food is a little more expensive to start with. The lunch and the birthday cake I got were both a bit more expensive. However the prices were not high enough that I won’t go back to get takeout or get another cake.

Spicy Ending: There are a few GF restaurants in Toon Town. The Griffin Takeaway is one of the best!