So as you might have guess from an earlier post, I currently live north of the border (American 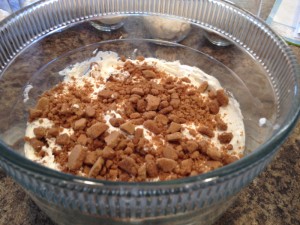 border into The Great White North). And that leads to not having one, but two of my favourite holidays – Thanksgiving! Or as I call it Turkey Day. For some reason, I almost never do turkey any other time of the year even though it’s one of two meals I look forward to in the fall.

Since I was diagnosed with Celiac’s there were a lot of things I had to give up. But I was determined that Turkey Day would not be one of them. Thus the Cajun Rice Stuffing and this recipe for a pumpkin trifle – again, not sure why I never do it any other time of the year. Maybe it’s ingrained that I would be cheating on Turkey Day? But I digress …

This was one of those things that I was determined that I would be able to have. My wife found a recipe and I altered it to fit into my GF lifestyle. And it rocks – thanks to those all important GF graham crackers! The good thing about this recipe is that it can be made either in one large batch or as individual servings.